An estimated 85% of immigrants to the United States arrived in New York City; although many headed west, the majority remained in the city. Based on Census data, between 1820 and 1920, the population of New York rose from 124,000 to 5.6 million (!). Among them, many were Italians who came over with their families or started a family once they settled in NYC.  While most Italians arrived at the turn of the last century (1895 to 1920), which is after all the NYC boroughs started to register civil birth certificates, it may not be easy to locate the NYC birth of your ancestor.

New York City began registering civil birth certificates at different times in the five boroughs: Manhattan (New York County) and Brooklyn (Kings County) in 1866, Queens County in 1888, the Bronx in 1895, and Staten Island (Richmond County) in 1898. Eventually the counties were renamed “boroughs” and consolidated into today’s New York City. Prior to these dates, births were recorded in ledgers called libers, with minimal information.

Although birth indexes for all five boroughs are available online, there is no guarantee that you will find the birth you are looking for. The names were often misspelled because of the sloppy handwriting of the registrar or simply because the parents were illiterate. You can find birth records of multiple siblings where last names are spelled differently in each document. Babies were often given Italian first names (which were Americanized later…Vincenzo to James, or Gaetano to Thomas) that were transcribed incorrectly based on what the recorder could hear (Salvador instead of Salvatore); other times they were recorded with a nickname “Joe” instead of Joseph or without a first name altogether as “no name baby”.

Remember that at the time babies were born at home and not necessarily all these births were officially recorded with the city hall. In fact, it is estimated that about one quarter of births in NYC were unreported before 1910. Could the Catholic Church have played a role in dissuading parishioners from following the law (with the risk of having to pay a fine) and only record baptisms instead? Were midwives the ones to blame for not having registered the birth of these children?  Possibly, but this article which appeared in the New York Herald in 1904 seems to tell a different story. 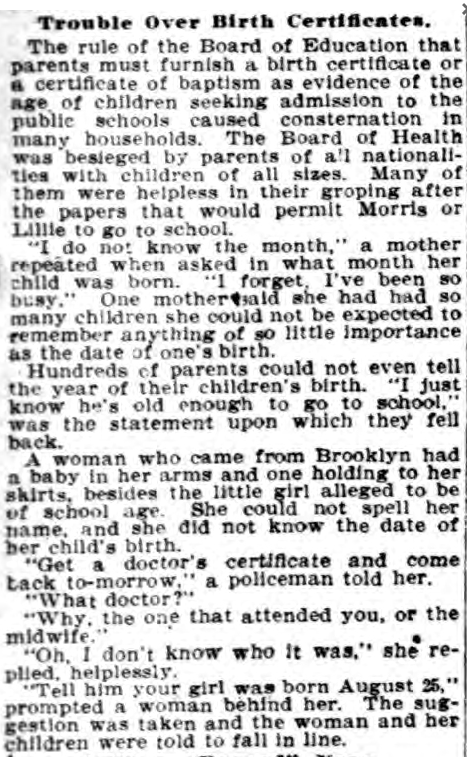 If you are planning to apply for Italian citizenship, you will be required to document every single vital event for each generation linking you to your Italian born ancestor; births, marriages, divorces, deaths, etc. But what if you cannot find the birth of the first child born here in the US? My Italian Family is here to help!

We can determine if you qualify AND provide you with a free personalized estimate; simply fill out this form

As always, our phone lines are open and you can easily book your free call with us!

If you already know that you qualify and you are ready to get started, sign up for our Full Assistance Start-to-Finish Program: we will acquire all the needed vital records from both Italy and the U.S., process all the required amendments, and complete your portfolio with apostilles and translations to Italian. We’ll prepare you for your appointment at the Consulate, instruct and coach you if applying in Italy, or introducing you to our affiliate law firm in Italy for handling the 1948 Challenge Lawsuits.