Where to find Family History Records in Italy

Researching Italian Records can be very rewarding if we take into account that people would remain in the same town generation after generation. It is part of the Italian culture to settle in one place, marry people from within the same community, live in the same ancestral home and pass on the same trade to the next generation. As a result, today we may be able to trace a family as far back as the late 1500s by researching records in the same town.

The oldest records are the parish Church Records that began after the Council of Trento in 1595; that marked the division of the population into parishes (i.e. parrocchie) where each priest was required to record the baptism, marriage and death of every parishioner. To this day, a Parish Church could serve one town, a group of small villages or one neighborhood in a large city. For instance, in large cities such as Salerno or Firenze, although civil vital registration records are kept in one location, the towns have 40 and 111 church, respectively. Not all of them may keep family records, but if your Ancestors came from larger towns, you will still need to learn in which neighborhood they resided in order to know which church may keep their family records. A family research project was once conducted in three different Churches because as it turned out the family had moved between parishes. In smaller towns the situation is much easier; for instance Marigliano (Naples) has seven Churches and Salcito (Campobasso) has only one. All Church Records were handwritten and although each priest wrote in the language he desired, the preferred one was Latin. These are mostly unique records. 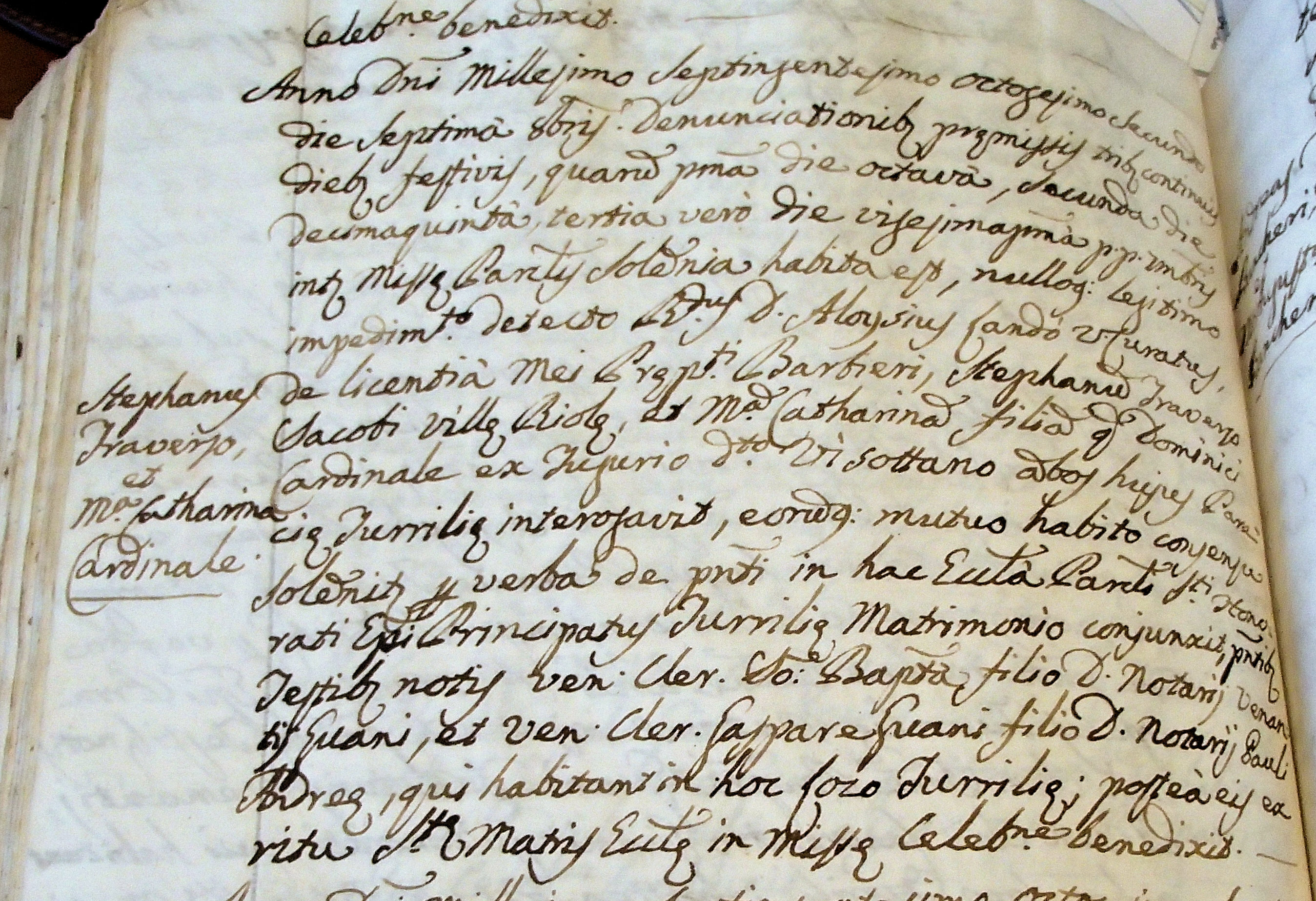 Two and a half centuries later, it was Napoleon Bonaparte who conquered a large part of Italy and introduced very important changes to most of the areas under his control. With the Napoleonic code, civil acts of birth, marriage and death started to be recorded in the local town hall (i.e. municipio) by town hall officials in a more standardized fashion and in duplicate copy. Despite the effort to introduce this practice throughout Italy, only southern regions, mainly the Kingdom of the Two Sicilies (from Campania down to Sicily, part of Tuscany, Lazio, Abruzzo and Molise) established the civil record system as early as 1809 (Sicily started in 1820).

We will have to wait until after the unification of Italy around 1870 for this practice to become official throughout Italy, i.e. central and northern regions.

The dual-recording by both “State” and “Church” initially created some confusion among people who, until the State was able to enforce its authority, were reluctant to declare and register their marriage, births and deaths in the local town halls according to the new rules. Eventually people adapted to the new system, which slowly became the official one.

Because vital records are kept at the local level throughout Italy, knowing the EXACT “town-of-origin” is essential to conduct a family research project. If your Ancestor came from a southern town, odds are that the research throughout the 1800s will be performed in the local town hall records, but if he or she came from a northern town, then the research will have to be split between the town hall and the local Mother Church and obtaining access in both sources can be difficult and time consuming. In both cases, hiring a professional researcher can become very helpful.

All in all, the goal for most of Italian-Americans is to reconnect to their long lost family and despite the difficulties that Italian research can present, the reward is always very high.