San Francesco (Saint Francis) was born on September 26, 1181 in Assisi to Pietro di Bernardone dei Moriconi, a very wealthy cloth merchant, and his wife Giovanna also known as Pica Bourlemont, about whom little is known except she is said to have belonged to a noble family of Provence, France. He was one of seven children.

Pietro was in France on business when Francis was born, and Pica had him baptized as Giovanni di Bernardone to honor San Giovanni Battista (Saint John the Baptist), in the hope he would grow to be a great religious leader. She even staged the birth of her son in a stable built for the occasion on the ground floor of their home to honor the birth of Jesus. Later the stable will be known as “stalletta” or “Chapel of baby Saint Francis” and it is located in the main square of Assisi.

When Pietro returned to Assisi, he decided to add Francesco (Francis) to his son’s first name. This name was the medieval equivalent of francese, i.e.“French” and was chosen to honor France, his favored business destination and to honor the child's maternal heritage.

Pietro’s worldly success and the imperial privileges granted by the city governor Duke Corrado di Lützen had secured for the young Francis a care-free life of material comfort. He received his education at the catholic school of San Giorgio, spoke fluent Latin and Provençal and was considered by his father the natural heir of his family business.

Francis was short and skinny, and had dark hair.  He was a popular youth, often the center of attention that could be found engaged in sport, frequenting the piazze of the city and leisurely spending his father’s money. His nickname was “rex iuvenum” (king of banquets).

After the death of the German Emperor Enrico IV (1165-1197) and the election of a new pope, Cardinal Lotario di Segni, later known as Innocenzo III (1198-1216), the political landscape changed and the pope took under his control additional territories which also included Spoleto and Assisi. The people of these towns revolted against the nobles who took refuge in the nearby town of Perugia. Francis who had dreams of being a knight took part in this war and when the Assisians were defeated in Ponte San Giovanni, he became a prisoner of Perugia and spent one year in prison. His family was able to get him out after paying a substantial ransom but his health had already been compromised. 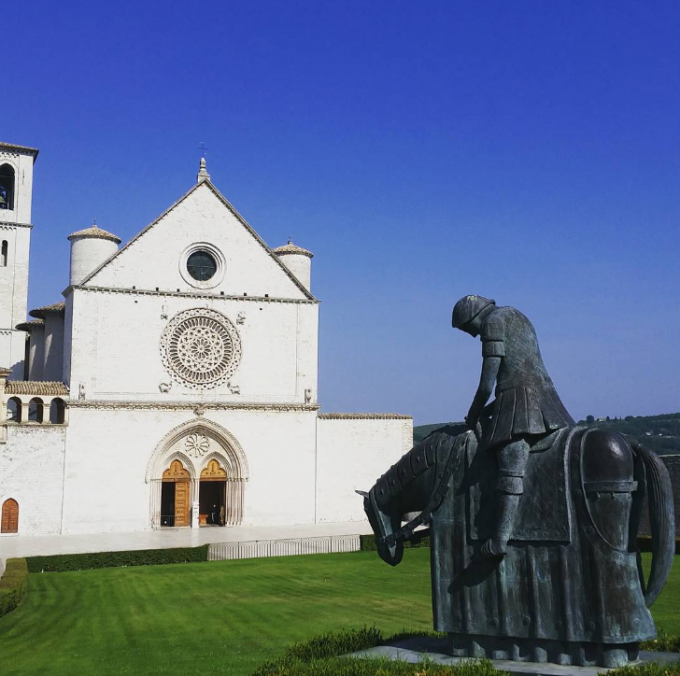 This started a spiritual crisis where he abandoned his former life to embrace meditation, nursing lepers and begging for the poor. His father Pietro attempted to bring him to his senses, first with threats and then with corporal punishment. After a final interview in the presence of the bishop Guido II, Francis renounced his father and his wealth, laying aside even the garments he had received from him while the bishop covered him with his mantle.

He lived as a beggar around Assisi. Returning to the town, he restored several ruined churches, among them San Damiano (pictured below), San Pietro alla Spira, and the Porziuncola in Santa Maria degli Angeli, just outside the town, which later became his favorite refuge. 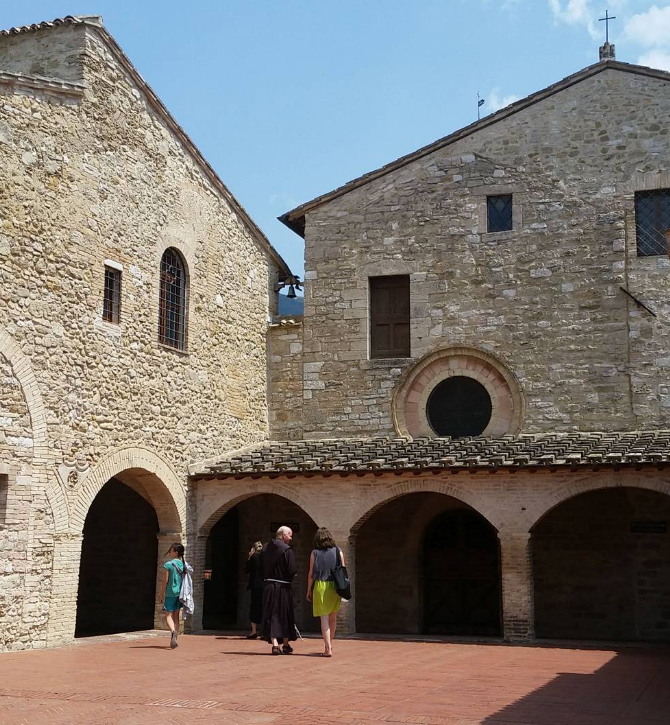 Founder of the Order of Friars Minor (lesser brothers) more commonly known as the Franciscans, he dedicated the rest of his life to help the poor and preach repentance. He died on the evening of 3 October 1226 singing Psalm 141 while lying on the bare ground. He was just 45 years old. His feast day is observed on October 4th.

On 16 July 1228 he was pronounced a saint by the next pope Gregory IX, the former cardinal Ugolino di Conti, friend and protector of St. Francis. The next day, the pope laid the foundation stone for the Basilica of Saint Francis in Assisi.