A family tree is mostly a collection of birth, marriage and death information; this is possible when these records are available and when we know the essential information to start a research in the Italian local sources such as town halls and parish churches.

If we want to expand our family history with facts and additional information, or if we need help to find some missing data (i.e. the exact town of birth), military and conscription records can be very helpful.

Military records started to be recorded around 1873 (although this varies according to each geographical area) with men who were then 18 years old. The imposition of the draft, one of the first acts of the newly formed Italian State was very unpopular at that time particularly in the agricultural south, where it meant sending strong men needed to cultivate the land over to the State for two to three years. 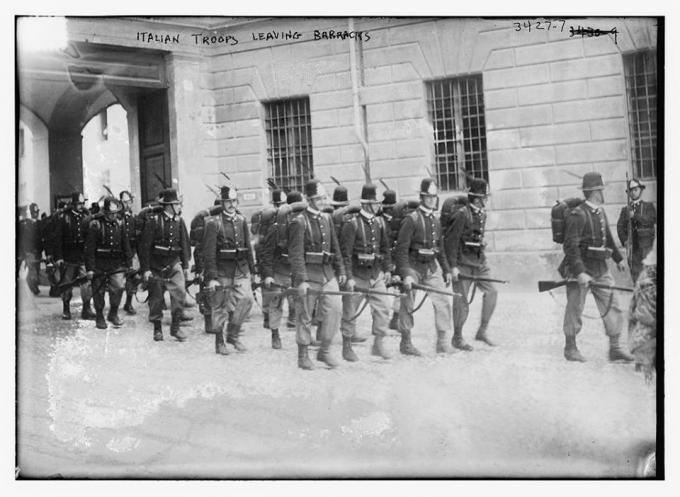 The conscription records, also called Liste di Leva list all men by year of birth (classe) and they are kept in the main provincial State Archive. If these records are indexed by surname and not by town of birth, they can be an extremely useful source of information, because they allow us to find the EXACT town of birth in case we only know the main province where our Ancestor was born. Besides listing the main civil vital information, including parents’ names and occupation, a detailed physical description is also provided:  the height, the chest measurement, eye, hair, and skin color, condition of the skin and any scars or birthmarks. The board’s final decision on whether the man was able or not for military service is also listed. Ineligibility was determined primarily by ill health and disability.

Eventually the civil birth records were used to detect draft evaders. At that time, many young men decided to leave the country and migrate to the New World, including sometimes to escape the military service.  In that case they would have been declared able but delinquent because they had already left the country.

A separate record called Foglio Matricolare (Military curriculum of a draftee) documents the individual’s military career, from changes in status to promotions until the final discharge.
The war caused many immigrants to be called to arms in 1915, even if they had already served the army for the mandatory period. Many Italians who were already abroad, returned to Italy, while many more remained in the US and were labeled as deserters, which is often indicated on their military records. This could explain why most of our Ancestors did not return to Italy for the longest time; after all, desertion was punishable with imprisonment and even death during the wartime.

It is true that many Italian-Americans (some sources estimate up to 400,000) served in the American army during the Great War and many lost their lives. Many serving in WWI pledged their loyalty to America, notwithstanding the mixed feelings public opinion had toward Italians.

We want to remember all of them who fought in defense of peace and freedom, our ancestors, our family members, our loved ones, our neighbors, and our friends who have given the ultimate sacrifice.

If military records can be considered an essential source when we don’t know the EXACT town of birth of our Ancestor who left Italy, they can also be considered an additional source to learn more about his physical traits and military achievements.