On March 19, Italy commemorates a joyful holiday dedicated to St. Joseph, San Giuseppe, patron saint of family life, hand-labor, and carpenters. It is in Italy that St. Joseph's day is also known as Father's Day. This Saint is one of the least nominated by the Christian orthodoxy: compared to Saint Francis', Saint Joseph's life is certainly less known. Still Saint Joseph symbolizes the father, a figure that means so much in our life.

The name derives from the Jewish "Yosseph" = he who gathers, who reunites - from the verb "assaph" = to gather, to increase, as in gathering of people to be reunited with God. This word became in Greek "Joseph" or "Josephos", and then "Ioseph", or "Iosephu", in Latin.

Joseph's roots are unclear; the gospels don't say much with the exception of Matthew and Luke who claim he was the descendant of King David and lived in the small town of Nazareth. The two evangelists differ in listing Joseph's father's name: he was either the son of Eli or the son of Jacob.  According to the Apocrypha, Joseph descended from David's family and was originally from Bethlehem; from his first marriage he had six children, four sons (Giuda, Giuseppe, Giacomo and Simeone) and two daughters (Lisia and Lidia). After he became a widower he married Mary.  The Catholic Church has always refused this interpretation claiming that these were Jesus' cousins or close relatives; in ancient Greek there are two separate terms used to identify siblings (adelfòi) and cousins (sìnghnetoi), but in Hebrew only one word is used for both. 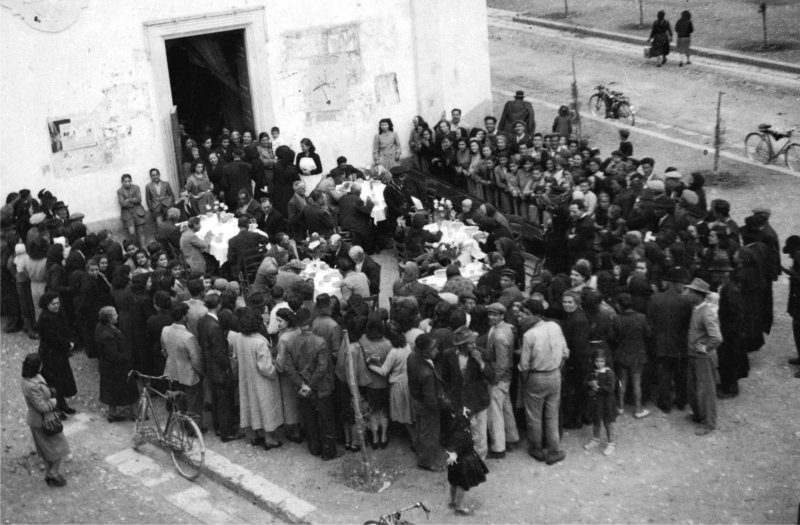 St. Joseph's Day celebration is unlike any other in Sicily; legends from the Middle Ages attributed the end of a devastating drought in that region to the people's prayers to the Saint.  To this day, Sicilians all over the world worship him with the ritual of the "Tavole di San Giuseppe". These tables usually include the altar with an image of the Saint, flowers, candles, fruits, traditional braided breads and a special meal of meatless dishes. The Table is done in fulfillment of a promise made to St. Joseph to thank him for his assistance in a time of family crises such as:

- BRINGING A LOVED ONE SAFELY BACK FROM WAR

- TRADITION (After the inItial promise was fulfilled, the family kept doing it and after several generations, they could not even remember why the Table was started in the first place)

It is a shared celebration with the entire community where the riches of food are given as alms to the poor, the sick and the homeless; no one can be turned away from this table.

This is the reality of our Ancestors before they left Italy. After more than a century, these cultural expressions have been maintained and survived as more than just memories.